I have already introduced myself once however, I never actually got involved with the team last year. Since I believe that I actually will be able to play with you all this year, I thought I'd re-introduce myself. (If this should be moved to General, let me know)

I've been playing serious airsoft for about 4 years now. Don't get to play very often though because of a lack of fields. I thought I might be able to play with you guys during my Freshmen year but due to the Corps of Cadets and the Regimental Marching Band, my time was drained. I'm hoping sophomore year will be different.

This may sound stupid but how should I start to get to know/play with you guys? Should I just try and make it to one of the weekend matches? Come to the dinners? I don't want to intrude or anything but I'd love to actually get involved with the team. What should I do?

Also, quick question about gun storage. What do you guys recommend? Being in the Corps, I'll be on Campus all four years. I can keep my gear in my room obviously, but what about rifles? Can I take them to the VTPD? That's what I was originally told but then I was informed that they don't allow you to store rifles there?

Hope to see you all on the field. 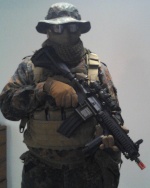 Please feel free to come to the weekend games or any of the other activities, you won't be intruding at all. We love to integrate the new guys and want them to feel part of the group.

As for gun storage, if you're comfortable enough some of the guys in the club would be happy to store your guns/gear for you. All you have to do is ask. I know Peter Schadt (who is in the Corps) keeps his guns with another member.

No question is stupid, please if you're wondering about anything do not hesitate to ask.

Greg, can one of you guys send him an invite from the Paraclete page?