Shimming from Bevel Gear to Pinion

Shimming from Bevel Gear to Pinion

The following thread is credited to KingdomofJah at airsoftmechanics. I first read of the technique from MikeOD at airsoftmechanics.  I have used it a few times...I am new at shimming as well, but as you can see from the video, Mike has put a chaingun through some serious stuff and no problems at all...


I have read a lot of information regarding the ?how to?s? of shimming, but the importance of shimming the bevel gear is often overlooked. Many of these guides tell you to begin the shimming process with the spur gear and work your way to the bevel gear. I am going to do my best to describe a process that is exactly the opposite; to begin with the bevel gear.

The engagement between the motor pinion and bevel gear is a crucial interaction of your gear boxes system. When done correctly, you will reduce mechanical noise (gear whine) and ultimately increase gear efficiency. Often time?s people will shim the bevel gear so it has clearance from the spur gear, they then assemble the gear box and blindly adjust the motor set screw until the pinion meshes with the bevel gear. This method works, but also has a couple disadvantages. Here is why?


In the same respect, if the bevel gear is shimmed to high, you will still hear a decent amount of mechanical whine. This is because there is too much slop or slippage between the gear faces on your bevel in pinion gears. Ideally, you want about a .1 - .2mm gap between the peak of the pinion gear and valley of the bevel gear. This distance may differ between gear sets, but I have found those measurements to work well for me. This picture refers to the spacing between the ?peak? of the pinion and ?valley? of the bevel gear:
https://2img.net/h/i864.photobucket.com/albums/ab209/KingdomOfJah/DSC_0595.jpg


To gain the most transmission from your pinion, you want the back edge of the pinion teeth to be equal to or just outside the radius of your bevel gear, like this:
https://2img.net/h/i864.photobucket.com/albums/ab209/KingdomOfJah/DSC_0606.jpg

Here is the method I use to shim a version 2 gearbox. Remove all shims from the top of your bevel gear. I will call this the top side of my gear:
https://2img.net/h/i864.photobucket.com/albums/ab209/KingdomOfJah/DSC_0591.jpg

Put your bevel gear in the right side of the mechbox and install the grip:
https://2img.net/h/i864.photobucket.com/albums/ab209/KingdomOfJah/DSC_0579.jpg

Now put the motor into the grip and fasten the motor plate:
https://2img.net/h/i864.photobucket.com/albums/ab209/KingdomOfJah/DSC_0580.jpg

This is where you adjust the set screw and align the pinion so it is equal to or just outside the bevel radius, like pictured below. Some MB?s actually have a window cut into the side allowing you to easily look into the mechbox.
https://2img.net/h/i864.photobucket.com/albums/ab209/KingdomOfJah/DSC_0586.jpg

Now push on the axel of the bevel gear to see how much slop or distance there is between the valley and peak. This will give you an idea of how many shims to add to the top of the bevel gear. Again, you don?t want the bevel tight to the pinion, but you don?t want it to loose either?..just have to experiment.
https://2img.net/h/i864.photobucket.com/albums/ab209/KingdomOfJah/DSC_0590.jpg

Then disassemble the grip from the mechbox and add all necessary shims to the top of the bevel. It is a good idea to check your work by reassembling the grip and observe. If you are satisfied you can now continue to shim the remaining gears?

Before using this method, my gun had a very high pitch whine that sounded like a sewing machine and adjusting the set screw had no effect. This method of shimming the bevel gear drastically reduced noise and the the hope is that it will also help reduce stress and add longevity to your mechbox.

From MikeOD:
https://youtu.be/1F0zpkmNux4
How I did it was this, drop the bevel with no shim close the box, tighten it down good with motor and cage attatched, loosen motor adjustment allen screw. This is where the peep hole comes into play. Now you can raise the motor so that the motor side of the pinion gear teeth align with the edge of the bevel gear. Then back the motor out about 1 mm so the motor side of the pinion gear is off the bevel edge by that 1 mm. Once you have that set, the rest is a piece of cake, just take the play out of the bevel to pinion gear..it should only take a couple of thin shims on the backside of the bevel gear to mesh the motor and pinion perfect. When you finish and get the gearbox all done, your motor pinion gear will still have that 1 mm difference from lining up perfectly edge to edge with the bevel gear, and that 1 mm is all it takes for a half turn of the motor height screw to align the gears on the money and put perfect pressure between the bevel and pinion without cranking the bevel gear and putting excessive pressure on your motor shaft. This will also let your motor really rip and run smooth and cool. I will be glad to answer any questions anyone has. Hope this explains my thoughts a little better than the video did.

Here is a guide by AGE, a tech on ASF
http://www.airsoftforum.com/board/shim-true-mechanic-N-t227299.html#entry18553585
***Photobucket is being a pita right now, so some of the pics have text and show where clearance is needed while other pics do not.  It seems to change around. I'll try and find out what photo bucket's problem is, but for the time being please bare with me***

Well most of you all know what shimming is, if not just search, plenty of answers as to what it is.... although, not many answers or guides on how to do it correctly, so here is a guide on how to shim like a true mechanic. A lot of people will tell you to start with the spur gear, that is not correct.  There is no mechanical application on the planet earth in which you start shimming in the middle and I can't fathom why anyone would.  You always want to start on one side and finish on the end, you don't want to start in the middle then get caught up going back and forth between gears.  You always want a nice and clean start to finish in your shim job.   Do this correctly and your gun will not only function, it will function like it is suppose to.

I'm going to try to make this as simple, easy and quick as possible for you guys.

First, take the pistol grip with the motor and the end cap, then screw it onto the top half of your gearbox shell with only the bevel gear installed.  If you have a v3, v6 etc. just screw on the motor and motor cage.

Adjust the motor hight so the pinion gear makes full contact with the bevel gear just like this (obviously it would be inside the gearbox, but this is just so you get a good view of the what it should look like). 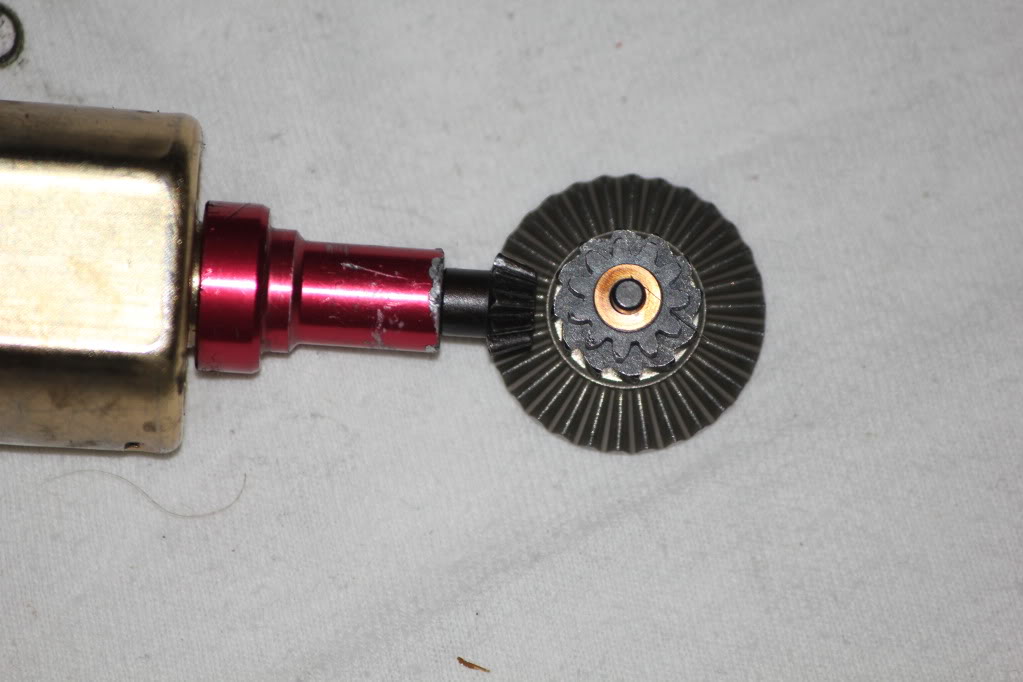 Then, place enough shims of the top face of the bevel gear so that it has enough clearance to avoid grinding against the gearbox shell and meshes well with the pinion gear. The bevel and pinion should be making as much contact as possible without hindering the movement or causing to much pressure. 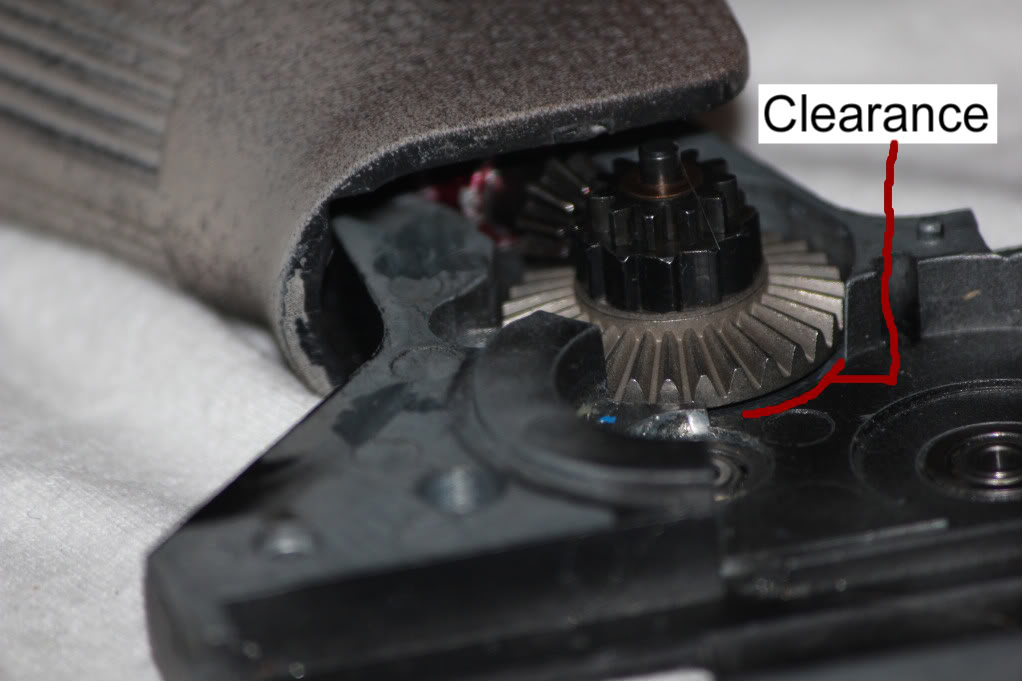 Now that the bevel gear and pinion gear are aligned and meshing properly, you can remove the motor and pistol grip or motor cage. 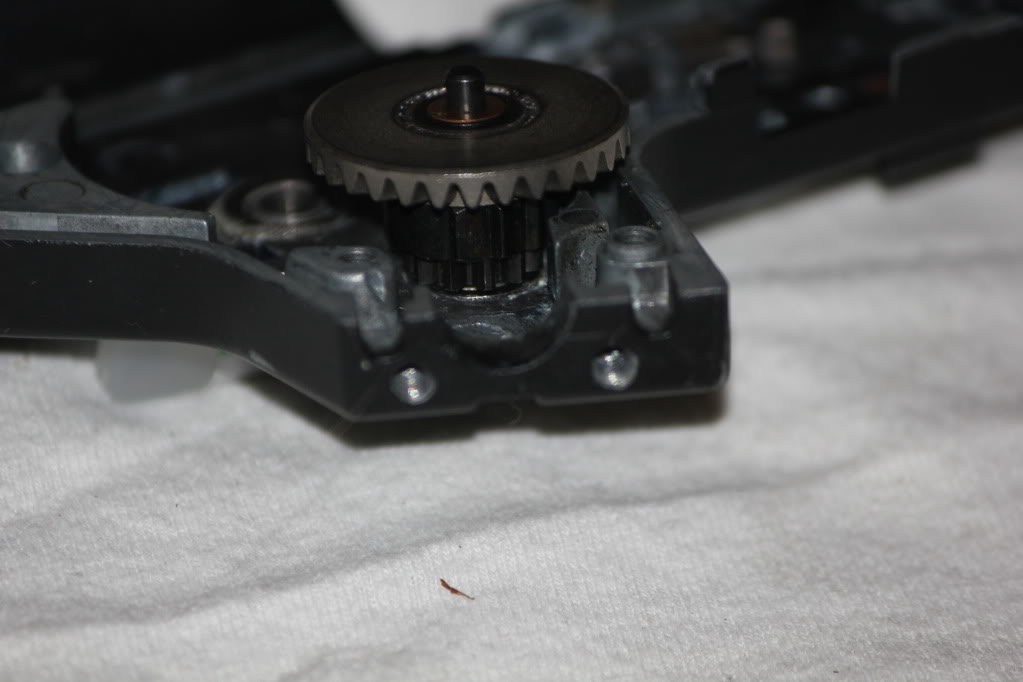 Next you install the spur gear.  Put enough shims on the bottom of the spur so it has just enough clearance so it doesn't grind against the face of the gearbox shell, the anti reversal latch notches on the bevel gear, and also the bevel gear's bushing or bearing. 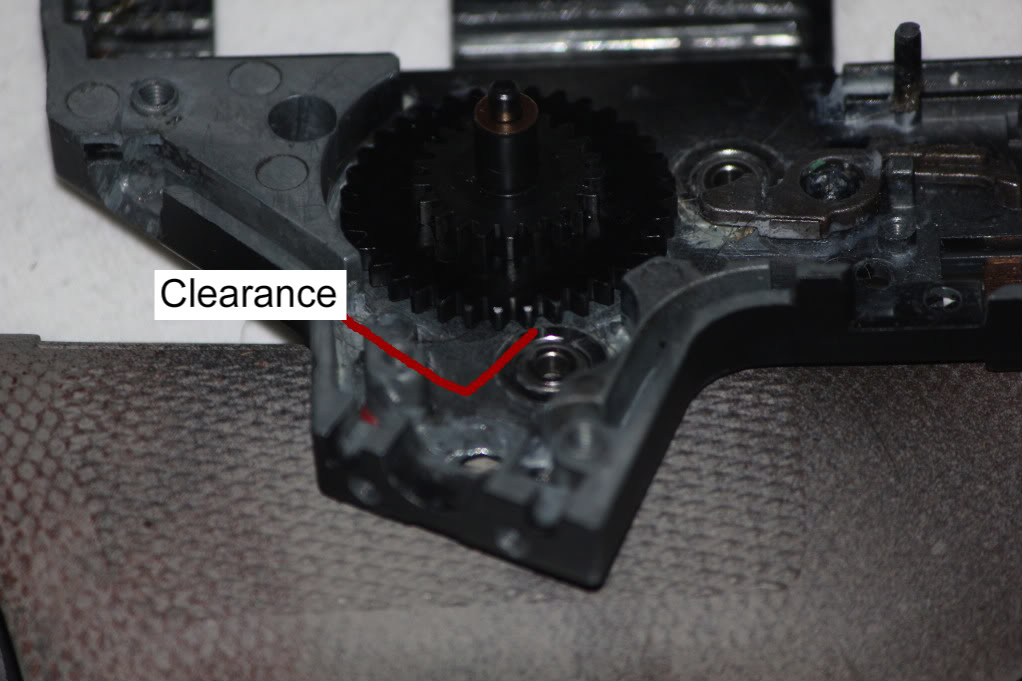 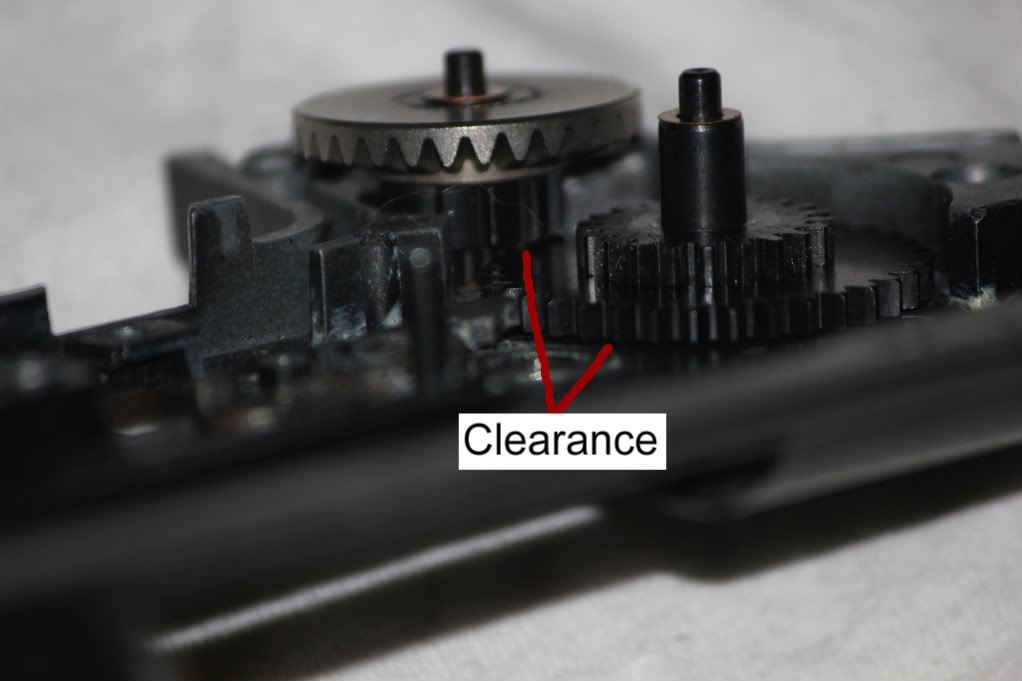 Then install the sector gear with enough shims on the bottom so it has enough clearance from the spur gear and cutoff leaver, and also makes as much contact as possible with the teeth on the piston. 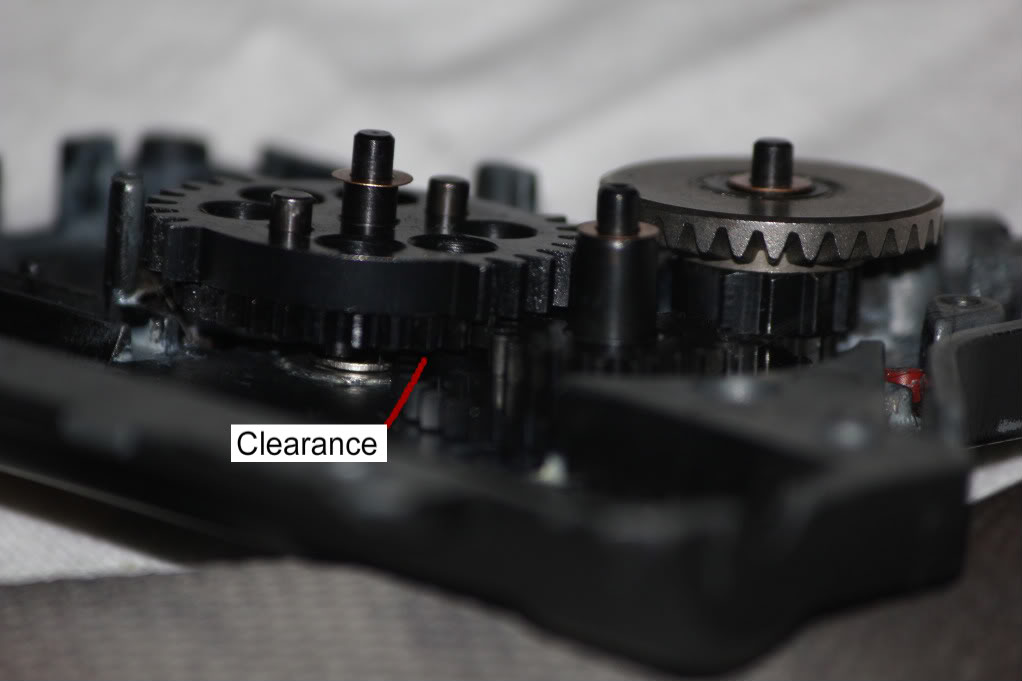 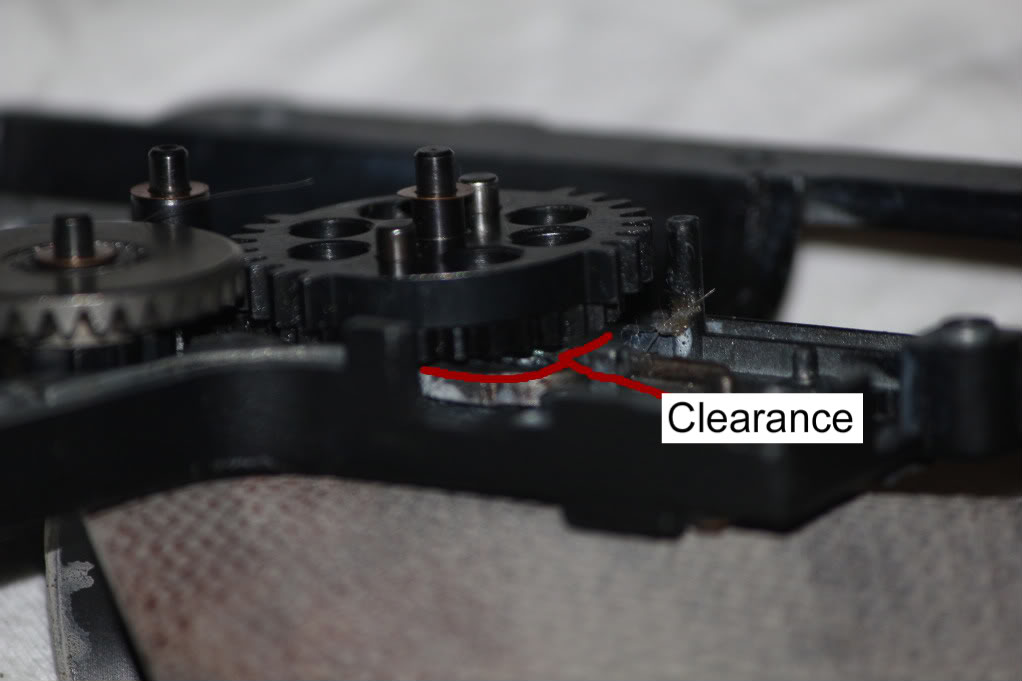 This is wrong.  The teeth are not fully contacting each other. 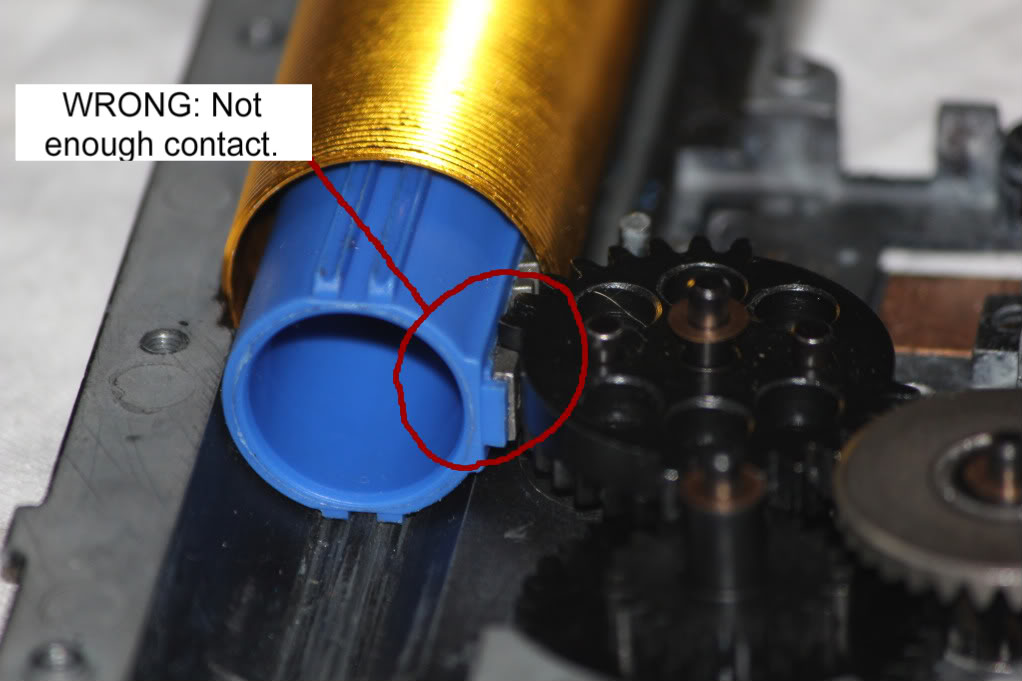 This is correct. The teeth are fully contacting each other. 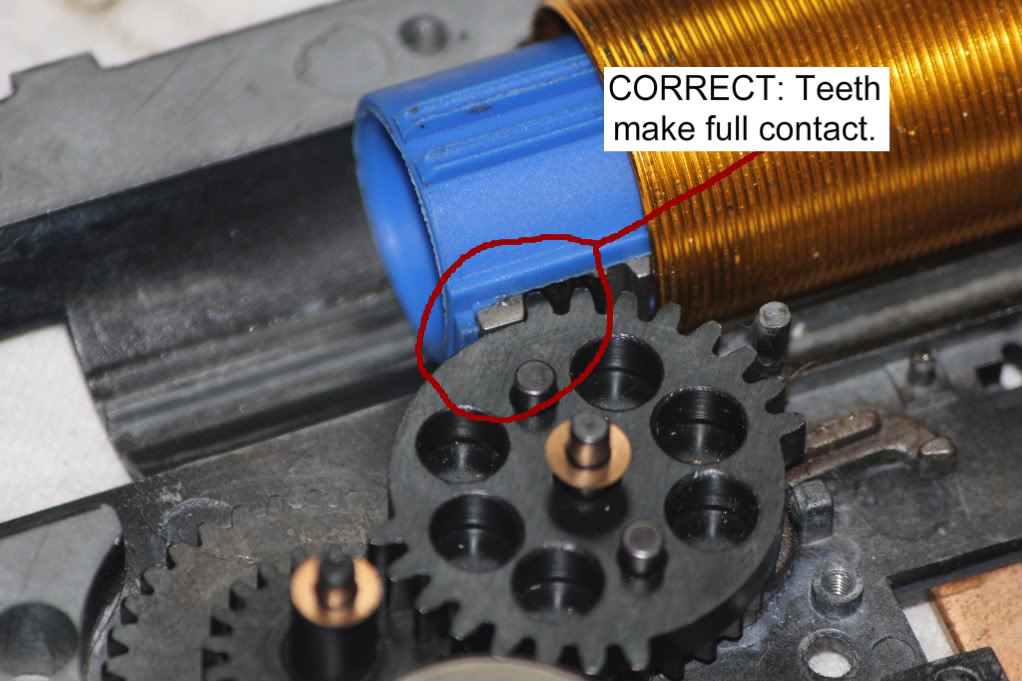 All the gears should have as little play as possible, yet spin freely and without hesitation.  I take my time shimming, and I shim gears to the point where they don't move side to side at all, so you may mistake them for being to tight considering you cannot feel them move from side to side, however they spin incredibly well when you move them and you can't even hear them spinning. That's the kind of precision and high tolorances you want, so take your time a get it right.

All there is to it.